Are the elite financiers behind BIG capital pushing austerity measures to protect the dollar value of the huge bailouts they received? We’re good, now you bear the brunt of the pain? On the larger scheme of things, does money as it is now make any sense? or has it been hijacked by a Las Vegas style high stakes gambling elite?

Old news for many, but a really great source for education via YouTube videos: Khan Academy

Sal gives a presentation on the Khan Academy, how it started and what sets it apart and challenges the notion that free is somehow by definition less valuable than very expensive, and that live is always and necessarily better than video. Plus some heart warming user feedback.

Sal Khan at Gel 2010 (founder, the Khan Academy) from Gel Conference on Vimeo.

Chin up people – poverty is less corrupted by greed. One positive to look forward to. Social networks and creativity prosper in poor communities. Dogma and greed in rich communities?

Manfred foresees a quickening approach to an ultimate barrier to things as usual. Apparently some people in his orbit of friends and colleagues even see the demise of civilization as we know it. Yet the powers that control policy get even more entrenched and fundamental in their policies. The facts are there, what we shouldn’t be doing is clear, but it has no effect on policy. Greed rules triumphant… probably right over the cliff.

excerpt from interview on DemocracyNow!:

AMY GOODMAN: And if you’re teaching young economists, the principles you would teach them, what they’d be?

MANFRED MAX-NEEF: The principles, you know, of an economics which should be are based in five postulates and one fundamental value principle. One, the economy is to serve the people and not the people to serve the economy. Two, development is about people and not about objects. Three, growth is not the same as development, and development does not necessarily require growth. Four, no economy is possible in the absence of ecosystem services. Five, the economy is a subsystem of a larger finite system, the biosphere, hence permanent growth is impossible. And the fundamental value to sustain a new economy should be that no economic interest, under no circumstance, can be above the reverence of life.

MANFRED MAX-NEEF: Nothing can be more important than life. And I say life, not human beings, because, for me, the center is the miracle of life in all its manifestations. But if there is an economic interest, I mean, you forget about life, not only of other living beings, but even of human beings. If you go through that list, one after the other, what we have today is exactly the opposite.

Zack de la Rocha and Tom Morello of Rage Against the Machine came together again to lend their music and inspiration to the workers’ battle for a more just world. This happened on the seventh day of the Truth Tour 2007, at the House of Blues, Chicago, IL. 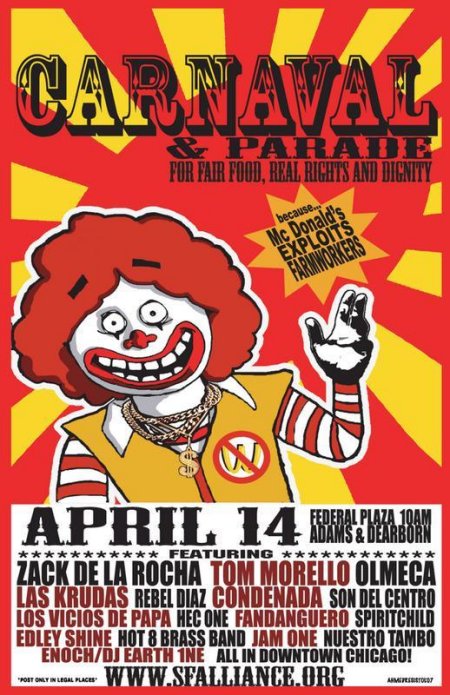